In 2018, the 100th anniversary of the November 11, 1918 Armistice which brought an end to the fighting of the First World War was observed. During the four years of war, many people from Vancouver stepped forward to serve, from all communities and walks of life, including not only those with strong connections to Europe but also Chinese Canadians, Japanese Canadians and members of local First Nations. The devastating losses were felt by all.

In the years that followed the end of the war, several monuments and places in Vancouver were created in honour and memory of Canadians who had served and those who lost their lives during the war. Across Canada there are over 6,000 monuments and cenotaphs dedicated to remembering those who fought in the 1914-18 conflict. Many memorials installed to mark the First World War were later rededicated to also mark the Second World War (1939-45) as well as new ones created and some now also note subsequent conflicts. Today, Remembrance Day and the ceremonies held honour and remember all who have served Canada and continue to do so in war, conflict and peace. 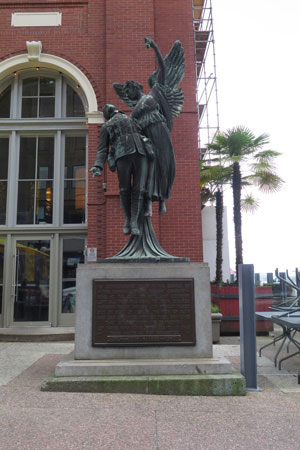 Installed in 1921, this bronze sculpture by Montreal artist Coeur de Lion MacCarthy is one of three identical sculptures installed in Canada. Commissioned by the Canadian Pacific Railway to mark the more than 1,100 CPR employees who perished during World War I, the statues were placed near CPR landmarks. Vancouver’s sits outside of Waterfront Station. The others are in Winnipeg (installed 1922) and Montreal (installed 1923). The dates of World War II were later added to each statue’s base. “Winged Victory”, also referred to as “Angel of Victory”, was considered one of the most evocative memorial sculptures, depicting an angel carrying a deceased soldier to heaven at the moment of his death. 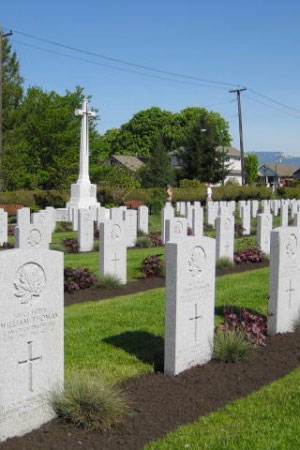 Vancouver’s cemetery has four Fields of Honour commemorating Canada’s veterans and those from other Commonwealth countries and allied forces. There are over 12,000 veterans buried here, including over 570 graves that are maintained by the Commonwealth War Graves Commission. The upright monuments near the flag pole commemorate those veterans whose graves were not marked by 2006. Many still remain without a marker but one can be placed through the cemetery’s donation program. There is also a granite memorial which was dedicated in 1983 to all Canadian military members who have passed away. 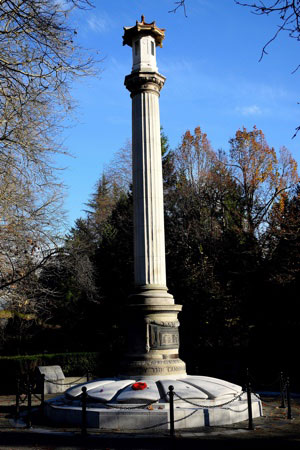 In April 1920, a monument commemorating Japanese Canadians who fought for Canada was erected in Stanley Park. Built with private donations, the monument comprises a base listing battles where Japanese Canadians fought and a stone column topped with a Japanese-style lamp that was intended to stay permanently lit. The light was extinguished in 1942 when attacks on Pearl Harbour and war with Japan led to the internment of Japanese Canadians. It was re-lit in 1985 with decorated First World War veteran Sgt. Masumi Mitsui in attendance. Restoration of the monument was completed in recent years led by a volunteer committee with support from a VHF grant as well as other grant funding and donations. 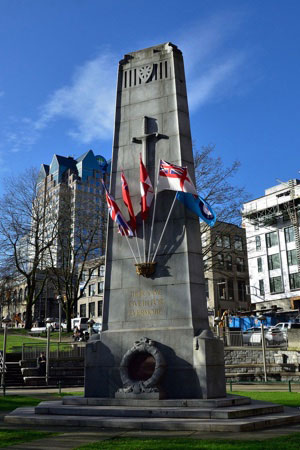 The largest Remembrance Day ceremony is held at the cenotaph in Victory Square each year on November 11. This location was significant for the young city of Vancouver – it was the site of Vancouver’s first courthouse, the intersection of the Granville townsite (now Gastown) and CPR townsite, and a recruiting ground during the war. The cenotaph was designed by G.L.T. Sharp and unveiled in 1924 to approximately 25,000 people. It has since been the location of an annual Remembrance Day ceremony, making it the longest continuously running ceremony in Vancouver. In 2002, lamp standards shaped like World War I helmets were installed to encircle the cenotaph as well as throughout the square.

On November 8, a National Indigenous Veterans Day Ceremony is held at Victory Square to honour First Nation, Metis and Inuit soldiers and veterans and their long distinguished legacy of serving in the Canadian Armed Forces. 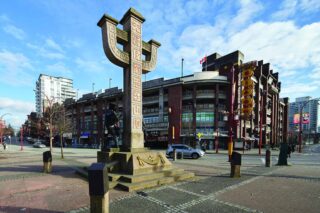 The Chinese Railroad Workers and Chinese Veterans Memorial at the Chinatown Memorial Plaza recognizes those who fought in World War II (1939-1945) and those who built the Rocky Mountain and Fraser Canyon portions of the Canadian Pacific Railway (1881-1885). On Remembrance Day, a ceremony for Chinese Canadian veterans takes place at the site. The Chinatown Memorial Monument is by sculptor Arthur Shu-ren Cheng and was unveiled November 2003. The bronze statues of the railway worker and the World War II veteran represent the sacrifices made by Chinese Canadians in building a united and prosperous Canada. The main column is a stylized form of the Chinese character “centre” which symbolizes Chinese culture. 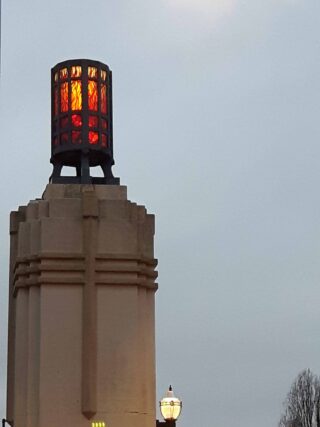 Flanking the entrances to the Burrard Bridge are four memorial brazier lights. With the construction of the bridge, the braziers were installed in 1932 as a memorial to those who served in WWI, designed by bridge engineer Major J.R. Grant and architect G.L.T. Sharp, both veterans. The braziers remind of those used for warmth by soldiers in the war. In January 2018, a special ceremony was held to relight the four brazier lights, which have been refitted with new LED lighting, and highlight their memorial role. The braziers now have a bronze plaque that recognizes the service by all Canadians in wars and peacekeeping missions. 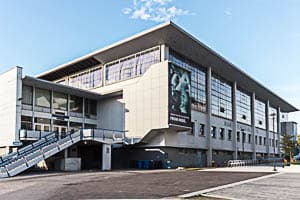 Conceived in November 1945 and designed by architect Ned Pratt, the War Memorial Gym was opened on February 23, 1951 as a “useful and living memorial”. War Memorial pays tribute to British Columbians, particularly those who attended UBC, who died during the two World Wars. A plaque inscribed with names can be found on the east wall of the foyer. The University’s Remembrance Day service is held here each year. 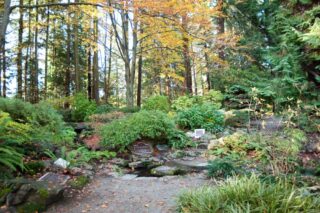 Just past the Stanley Park Pavilion is the Air Force Garden of Remembrance, a garden of rockeries dedicated by the Women’s Auxiliary to the Air Services on May 9, 1948 as a living memorial. Several plaques are installed here including those with the insignia of the Royal Canadian Air Force, Royal New Zealand Air Force and Royal Australian Air Force. Proceeds from the coins thrown into the wishing well are collected and dispersed by the Auxiliary to local military hospitals. 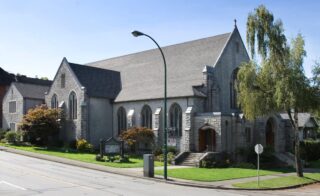 The Chapel and Hall (1923-28) were built as a memorial to those who served and died in the First World War. The Rev. (Lt.-Col) G.O. Fallis arrived in Vancouver in May 1920 having made a commitment while he was serving as a chaplain in France to return and build a peace memorial. The church houses the only copies outside Ottawa of the Books of Remembrance, which contain the names of all Canadians who served and died in World War I, World War II and the Korean War. These books are available to the public. In addition, the organ is a Casavant pipe organ donated by Americans in memory of the more than 1,500 Americans killed serving in the Canadian Armed Forces. 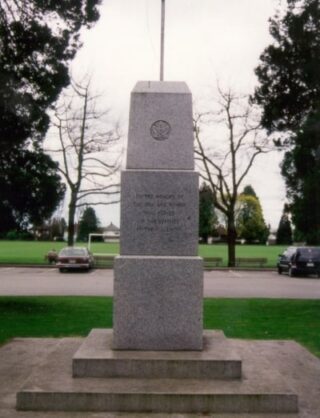 South Vancouver Municipal Engineer E. Dundas Todd designed this park as a memorial to soldiers who perished in World War I. It was officially opened on May 22, 1926.  With the amalgamation of three municipalities to become the City of Vancouver in 1929, the park was renamed as Memorial South Park. The cenotaph was erected on May 22, 1926 at South Vancouver Municipal Hall. It was relocated to the park and rededicated on November 11, 1939 “to the memory of the men and women who served in defense of their Country”. 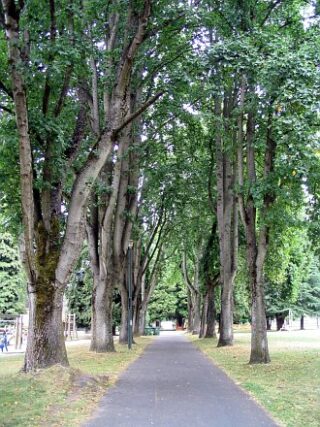 A community space with playing fields, lawn bowling and community centre, this park was originally Dunbar Park. It was renamed sometime after 1921 and dedicated to those who died in World War I.  Following the amalgamation of the Point Grey municipality with Vancouver, the park was renamed as Memorial West Park. 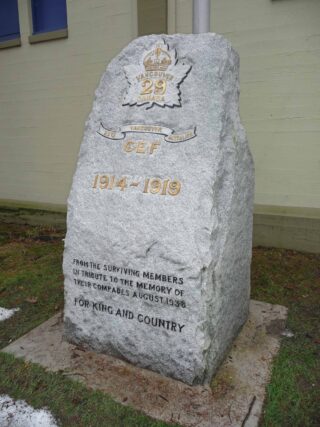 Located inside Hastings Park, a stone memorial was dedicated in August 1938 to the Canadian Expeditionary Force, 29th Battalion “from the surviving members in tribute to the memory of their comrades”. Hastings Park was a key training ground for soldiers from November 1914 to May 1915 prior to being sent off to war. The battalion, known as “Tobin’s Tigers” after their Commanding Officer Lt. Col. Henry Tobin, lived at the park during their training before marching to New Brighton and boarding the trains. 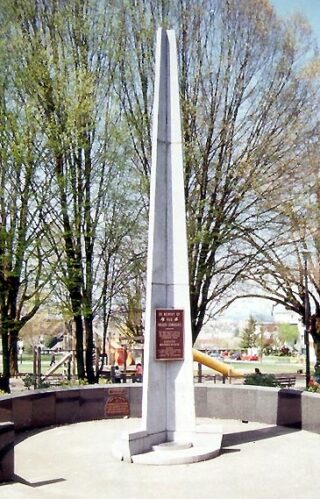 Originally the site of the Irish Fusiliers Drill Hall, this park was purchased by the Department of Militia and Defense between 1911 and 1913. Following World War I the military’s needs changed and the site was abandoned. The area was leased to the City in 1929 and named for the Grandview neighbourhood. A memorial cairn was located on Grandview Park until its replacement by a new war memorial on November 11, 1959.