Sustainability, Heritage and Community in Vancouver

VHF has created a documentary mini-series featuring local projects that showcase the sustainable possibilities of older buildings. Highlighting creativity and ingenuity, the films show three methods that were used to preserve heritage while creating practical spaces for a modern city.

With funding from Telus, each part in the documentary film series is based on a case study completed by VHF intern Samuel McFaul. With the assistance of talented local filmmakers, the resulting mini-series looks at three Vancouver projects that highlight the interplay of sustainability, heritage and community. The documentaries take an in-depth look at the restoration and infill project at the Gow Block, an energy efficient renovation of a Vancouver Special, and a lane home built behind a heritage home in Grandview-Woodlands. The films include interviews with the building owners, project details from contractors and insight from heritage professionals and historians.

VHF launched the film with a screening and discussion panel at Vancity Theatre with Director of the City Program at SFU, Gordon Price, Architect Andre Rowland and Cultural Researcher Naveen Girn.

This film has been classified ‘G’ by Consumer Protection BC and is approved for all audiences. The films are available to view in three parts as well as a full version on our Youtube channel by following the links below:

(Click the titles to open a pdf of each study)

Built in 1910, the Edwardian Gow Block became an ambitious project to restore a neglected heritage commercial building. By building a row of townhomes behind the historic structure, costs were offset and housing was added to the busy Commercial Drive neighbourhood.

The prolific Vancouver Special is a favourite among renovators due to its flexible floor plan and maximized foot print. For this particular renovation, the family wanted to push the limits of the style by making it as energy efficient as possible. By utilizing natural light and air flow, along with small interventions in design the resulting home is innovative as well as beautiful. 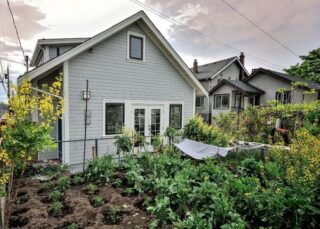 Adding density to heritage rich neighbourhoods, such as Grandview-Woodlands, can be a challenge. The need for more housing is great, but so is the desire to preserve what makes these areas so livable. One family found a happy medium in this charming lane house, sympathetically built to complement the principal residence, while allowing rental income in the short term, and a place for extended family in the future.