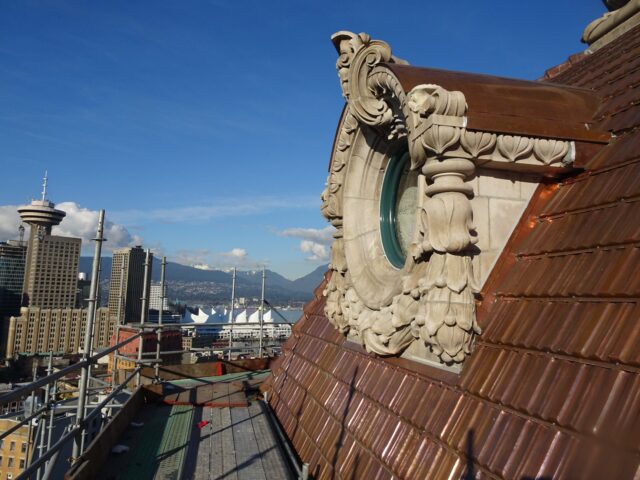 Learn about the state of  heritage and conservation projects in Vancouver today with experts in architecture and design, conservation, city planning and other related fields. These virtual talks discuss issues, local projects and topics that are relevant to the future of Vancouver’s historic neighbourhoods and buildings. The speakers offer in-depth illustrated presentations followed by a Q&A.

Thank you for joining us this spring for two incredible presentations focusing on decolonizing heritage, as well as inclusion, collaboration and partnership with indigenous neighbours. If you missed it, Rena Soutar and Julia Hulbert’s presentation on ‘Expanding Relevance through Decolonizing Heritage‘ is now available for viewing on our YouTube channel.

You can earn 1 Old School credit per Evening Lecture or Lunch and Learn, to a maximum of 3 towards VHF’s Heritage Conservation Certificate. Professional Development Credits (AIBC, PIBC, BOABC, BCSLA, AICBC) are dependent on the lecture topic and speaker – talk to your professional body to inquire how to register your attendance. 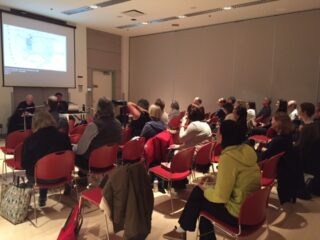 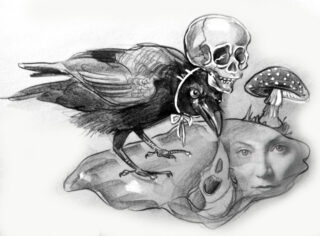 In 2003, Katarina Thorsen volunteered as a researcher and student criminal profiler with the Babes in the Woods Task Force. The task force’s goal was to identify the children whose skeletal remains were found in Stanley Park on January 15, 1953. Katarina will share her experiences of working with the task force, developing a profile, sifting through archives, meeting with communities, cataloguing the physical evidence and her unique creative approach to cold case investigation. A newspaper article, dated November 5, 1947, led Katarina on an unexpected 20 year journey of extensive historical, genealogical, forensic and psychiatric research into a Vancouver-based Irish immigrant family whose story is currently being developed into a graphic novel.

The prologue/teaser to the project was published in 2022 as a limited edition broadsheet, funded in large part by VHF’s Yosef Wosk Publication Grant.

Please note our Heritage Lunch and Learns are being offered by donation this spring. Suggested donation amounts for each event are $15 for one attendee, $30 for a household of 2+ viewers and $9 for students. If you would like to make a larger donation ($20 minimum for a tax receipt) or become a monthly donor, please contact the VHF office at 604-264-9642. Thank you for your support.

Katarina Thorsen is an artist, writer and researcher passionate in her belief that art can heal, build connections and deepen exploration. The heart of her work is visual storytelling, restorative practices, whole brain engagement and creative facilitation. Katarina published her first book, Drawn Together – Maintaining Connections and Navigating Life’s Challenges with Art, in 2013. Her current project is a graphic novel entitled Joseph –  a true story and Vancouver based family saga spanning 1924 to 1963. 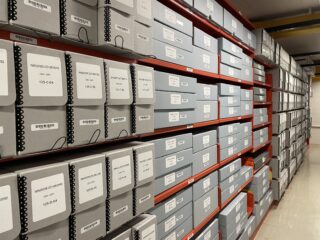 90 Years of the City of Vancouver Archives

The City of Vancouver Archives acquires, preserves and makes available records that document the history of Vancouver and its citizens. In June, the Archives marks its 90th anniversary of doing just that. So if you’ve ever wondered about what goes on at the Archives or wanted to know more about its history, this is a Lunch and Learn for you. Join City Archivist Heather Gordon, Reference Archivist Kira Baker, and Archival Assistant Bronwyn Smyth for a presentation about the Archives, how the Archives is celebrating this nine-decade milestone, and have the opportunity to ask questions in an ‘Ask Us Anything’ style session. 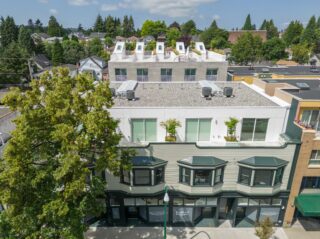 Significant for its Edwardian-Era vernacular design that is associated with the early growth and development of the Cedar Cottage neighborhood, the Broadhurst & Whitaker Block was built in 1910. One of the oldest commercial and residential buildings in the surrounding area, it represents a small, but thriving village that flourished following the establishment of the interurban tram stop at 18th and Commercial Street in 1891. Join architect Marianne Amodio to learn about the revitalization of the building and how its heritage and conservation were considered in the retention and restoration of the historical building and the addition of an infill residential building in the lane.

About the Speaker
Marianne Amodio holds a Masters Degree of Architecture from the University of Manitoba, is a registered Architect with the Architectural Institute of British Columbia and a member of the RAIC.

She began her eponymous firm, Marianne Amodio Architecture Studio in 2009. The practice was awarded the Arthur Erickson Award from Emerging Architect, followed by the AIBC Award for Emerging Firm. In 2017, the firm welcomed Harley Grusko AIBC and was renamed MA+HG Architects.

Marianne is an advocate for beauty, meaning and service in Architecture. 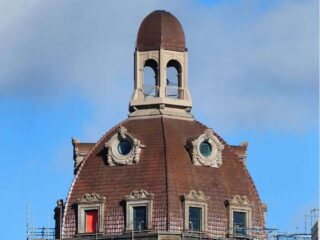 Learn about the state of heritage and conservation projects in Vancouver today with experts in architecture and design, conservation, city planning and other related fields. Our past virtual heritage lunch and learns discuss issues, local projects and topics that are relevant to the future of Vancouver’s historic neighbourhoods and buildings.

Recordings from past VHF virtual Lunch & Learns are available. A link will be sent for each virtual lunch & learn following your purchase and the video will be available for viewing on YouTube up to a month after your purchase. Price includes GST and PST.

April 21 – Expanding Relevance through Decolonizing Heritage
Rena Soutar, Manager of Decolonization, Arts & Culture at the Vancouver Park Board and Julia Hulbert, Arts & Culture Planner at the Vancouver Park Board led a conversation on the expanding relevance of heritage. This lunch-time conversation introduced how the field of heritage planning can begin to decolonize and reckon with difficult histories.

May 12 – The Uncomfortable Reality of Inclusion, Collaboration and Partnership with Indigenous Neighbours
In this illustrated presentation, Janice Alpine, Ktunaxa Nation Business Development Officer/Tourism Engagement, and Elana Zysblat, BCAHP – Heritage Consultant, Ance Building Services, shared how the Ktunaxa finally became the tellers of their own story in the Fernie Heritage Strategy, about their ongoing work together today, and a list of their shared understandings on this type of collaboration, both for Indigenous and non-Indigenous participants. They also shared some tips, including: “Truth” comes first in TRC; Willingness to Work in Discomfort; How Beginnings Matter; Consensual Language; Taking the Time and Valuing Difficult Perspectives.

October 25 – Exploring the New Heritage Site Finder
Did you know that VHF has an interactive map of buildings and sites found on Vancouver’s Heritage Register? During this lunchtime session, VHF and SplitMango Media shared about the history of the project, demonstrated all of the upgrades to the newly updated Heritage Site Finder, and encouraged the audience to discover the many ways they can use the map to explore heritage places in Vancouver.

November 3 – The little house that could: The conservation of the Coulter House within the HOUSS development
In this lunchtime session, developer Joe Carreira and heritage consultant Elana Zysblat shared the story of this unconventional project, which they saw as an innovative solution to the challenge of preserving the history and built heritage of the Mount Pleasant neighbourhood, while appealing to the needs of a community known to be a catalyst of industry and innovation. This new and unique strata office, commercial and industrial mixed-use building, developed by Conwest Group, boldly incorporates the 1901 heritage house that stood previously on the site as the focal point of its design.

April 29 – Hollywood Theatre
A much-loved icon on West Broadway, the Hollywood Theatre has recently re-opened as a film, live performance and arts and culture venue. Designed by Harold Cullerne in 1935 for the Farleigh family, the Art Deco movie theatre was one of the last remaining single-screen movie theatres in the city when it closed in 2011. With significant effort by the local film, arts, heritage and residential community, alongside the City of Vancouver and the building owner and theatre operators, the architects were able to secure its future through a Heritage Revitalization Agreement that enabled the restoration of the building, its significant historical features and its use as a theatre. The building retains many of its distinctive features, including neon exterior signage and painted façade and interior Art Deco detailing, while allowing for modernizations that secure its future adaptability and continued use. Architect Marianne Amodio of MA+HG Architects Inc. shared the rehabilitation of the building and how its heritage and conservation were considered.

September 23 – St. Andrew’s-Wesley Church
One of the largest historic churches in the province, St. Andrews-Wesley Church was designed by the architects Twizell & Twizell in a freely-adapted Gothic Revival style between 1930 and 1933. A designated municipal heritage site, it recently underwent a full seismic upgrade and restoration work, which was awarded the 2021 BC Heritage Award for Outstanding Conservation. Heritage consultant Donald Luxton and engineer of record for the project Dennis Gam discussed the completed restoration and seismic upgrade, including how interior and exterior character-defining elements were preserved or rehabilitated and how missing or deteriorated elements were restored.

October 21 – Sun Tower
Designed in the Beaux Art style in 1911-12 by W.T. Whiteway, the Sun Tower is an iconic and flamboyant feature on the Vancouver skyline. It was originally home to the Vancouver World Newspaper. Its publisher, Louis D Tayor, was a prominent figure who was elected as mayor eight times. The paper promoted the war effort during the First World War while also directly participating in fundraising efforts. In 1915 Taylor lost control of the newspaper and the building due to the recession. The Vancouver Sun newspaper moved into the building in 1937 after its offices across Pender were destroyed by fire and it has been known as the Sun Tower ever since despite the newspaper moving out again in 1965. Powell Talverdi and architect Barry McGinn explored the recent envelope stabilization, dome reroofing and restoration work of the building that has been ongoing since 2018.

April 5 – Tamura Building Sheet Metal Restoration
Architect, Mitch Sakumoto, and Eagle Sheet Metal owner, Randy Sewell, discussed one of the last in the series of City of Vancouver and BC Housing SRO rehabilitation’s, Tamura House. The building is a storied part of the Japanese community on Powell Street and now boasts fully restored spectacular metal pediments. The talk covered how sheet metal work is created and how the heritage elements of Tamura House have been brought back to life.

April 26 – Impacts to Heritage of Real Estate, Speculation and Development in Vancouver
This discussion covered a subject everyone has an opinion about – the impacts of land speculation and development, the foreign-buyer tax and other issues affecting Vancouver’s heritage architecture. When current property assessments are reportedly 95% land value and 5% building value, preserving older homes becomes more and more challenging. Our two presenters were Researcher and SFU City Program Director, Andy Yan, who studies the economics of property values and sales in Vancouver, and Gordon Price, Fellow with the SFU Centre for Dialogue, and former City Councillor and SFU City Program Director.

September 28 – Burrard Street Bridge
Heritage Consultant, Donald Luxton, discussed the scope of rehabilitation work on the 1932 landmark Art Deco Burrard Bridge, as well as the addition of new street lighting, restoration of the original pedestrian lighting, permanent bike lanes and the design that was selected to add fencing. 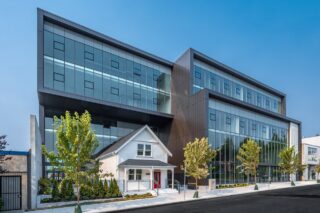 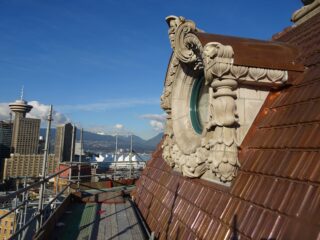 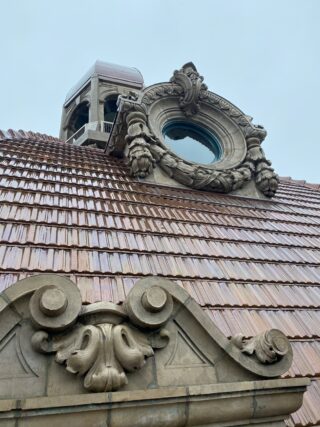 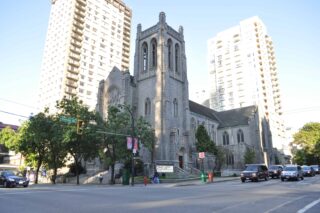 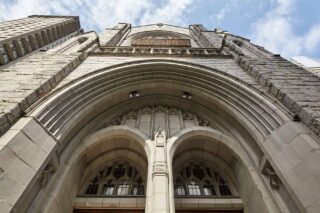 St. Andrew's-Wesley is a cathedral-style church designed by architects Twizell & Twizell to accommodate two congregations that came together in 1927 with the formation of the United Church of Canada. 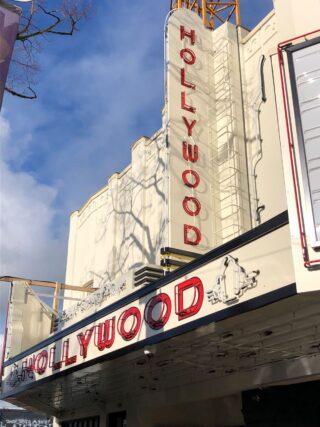 This 1935 Art Deco theatre on Broadway was restored and re-opened in 2020. 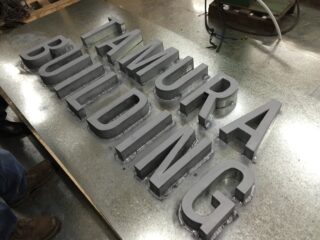 Close-up of the Tamura Building sign, part of the 2017 presentation on the sheet metal restoration by Mitch Sakumoto & Randy Sewell. 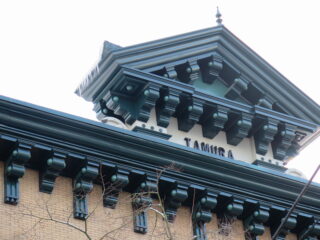 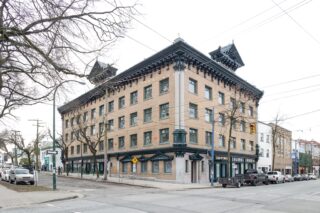 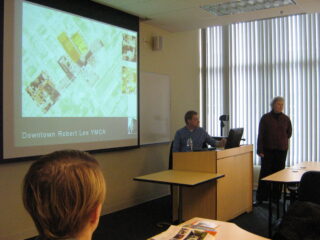 Allan Endall gives a presentation on the Downtown Robert Lee YMCA in 2011. 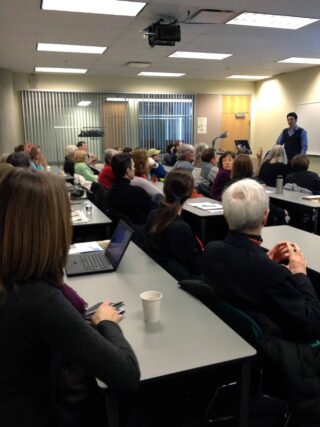 Robert Fung gives a presentation on the Economic Revitalization of Gastown & New Westminster through Heritage Conservation in 2012.

St. Andrew's-Wesley is a cathedral-style church designed by architects Twizell & Twizell to accommodate two congregations that came together in 1927 with the formation of the United Church of Canada.

This 1935 Art Deco theatre on Broadway was restored and re-opened in 2020.

Close-up of the Tamura Building sign, part of the 2017 presentation on the sheet metal restoration by Mitch Sakumoto & Randy Sewell.

Allan Endall gives a presentation on the Downtown Robert Lee YMCA in 2011.

Robert Fung gives a presentation on the Economic Revitalization of Gastown & New Westminster through Heritage Conservation in 2012.