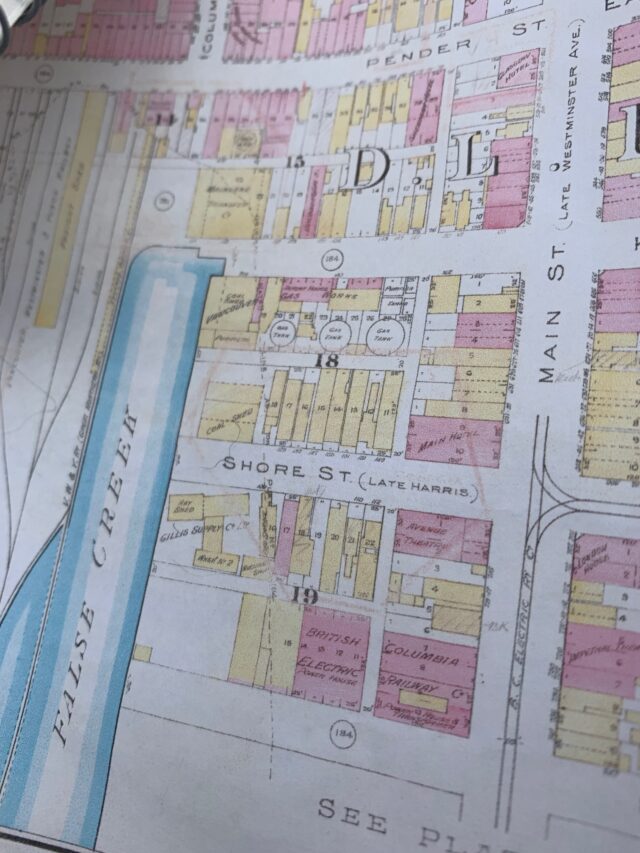 Join us to explore local history and heritage from home on a virtual walking tour. While some of our regular events are on hold, we can still experience the streets of Vancouver’s neighbourhoods and discover some of the history and heritage places of diverse communities.

Our guide on these virtual walking tours is local historian, author and seasoned walking tour guide, John Atkin. Throughout and after a pre-recorded virtual stroll, there will be opportunities to ask John questions live. 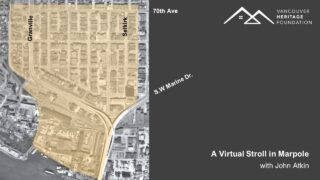 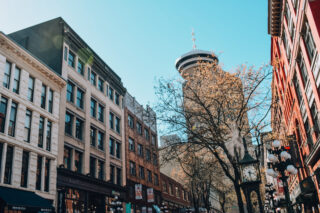 Join local historian, author and seasoned walking tour guide, John Atkin to explore local heritage from home on a virtual walking tour. Experience the streets of Vancouver’s neighbourhoods and discover some of the history and places important to Vancouver's diverse communities.

April 13th – Look Up, Look Way Up: A Virtual Stroll
There’s a different world up above the sidewalk level where gargoyles peer down while serpents hide away under balconies. Looking up above street level reveals details and designs hiding in plain sight. Join local historian John Atkin on this virtual stroll as he takes a unique look at some of the city’s landmark buildings and what is special and noteworthy above your heads.

October 6th – A Virtual Stroll through Gastown
Part of the historic downtown core, Gastown was designated as a provincial heritage area fifty years ago in 1971. Along with Chinatown, these two areas were the first to receive this recognition and heritage protection in the city. In 2009, Gastown was recognized as a National Historic Site of Canada. Civic historian John Atkin took us on a virtual walking tour through this historic neighbourhood to explore the history of some of the buildings as well as the factors that contributed to its heritage designation.

November 13th – Monuments and Memorials: A Virtual Stroll through Vancouver’s War History
In the years that followed the end of World War I, several monuments and places in Vancouver were created in honour and memory of all Canadians who had served and those who lost their lives during the war. Civic historian John Atkin took us on a virtual stroll to discover some of Vancouver’s lesser known monuments and memorials.

February 20th – Discovering Heritage Place: A Virtual Stroll
Heritage is all around us – sometimes you just need to look closely! Local historian, author and seasoned walking tour guide, John Atkin explored some of Vancouver’s lesser-known heritage spots and shares the history of some of the buildings that make our neighbourhoods unique on this virtual walk.

March 18th – A Virtual Stroll Through Marpole: Part II
On this virtual walk, we returned to Marpole for another look at the fascinating history of this southerly neighbourhood. Heading north of 70th Avenue where the low-rise apartment buildings give way to single family houses, many of the early residences were somewhat grander and sat on estate-like lots. Along with these, there are some interesting mid-century architecture, churches and local landmarks including Historic Joy Kogawa House.

April 14th – From Sawmills to Condos: A Virtual Stroll through the River
In the very south east corner of Vancouver by the Fraser River was once the site of the White Pine Sawmill, one of the largest mills in the province, which at the peak of production could produce 36 miles of lumber a day. Since its closure and demolition in the early 2000s, the site has become the River District – home to shops, parks and condos with sweeping views of the Fraser River.  On this virtual walk, we took a look at the transformation of this waterfront area and surrounding area of Fraserview.

May 15th – The Modern City Begins: A Virtual Stroll through Vancouver’s Industrial Waterfront
As Canada’s largest port city and a gateway to global markets, the waters and shores of Burrard Inlet are an important part of Vancouver’s industrial, commercial and transportation infrastructure. This natural harbour was one of the engines of non-native settlement with the development of the Hastings Mill and the railway terminus. On this walk, local historian John Atkin took a closer look at the history and surviving heritage that can be found on the shore, including a fish cannery and one of the largest BC Mills pre-fabricated buildings in the city.

September 16th – A Virtual Stroll in Marpole
Many of us know Marpole as the strip of commercial activity at the southern end of Granville Street or for the blocks of three-storey apartment buildings from the 1950s. But the community is also the site of significant cultural and archaeological resources, and was the location of some of the earliest non-native settlement in what would become Vancouver. Situated on the north shore of the Fraser River which has sustained the Musqueam people for thousands of years, the original small settlement grew into a substantial centre of industry and commerce with canneries and sawmills that employed a multi-cultural workforce including Musqueam, Japanese and Chinese among others. On this virtual walk, we explored the area’s fascinating architecture along with its diverse cultural and transportation history.

October 17th – A Virtual Stroll in Cedar Cottage and Lakeview
A mix of industry, transportation and interesting geography, Cedar Cottage is full of surprises. Once a thriving business and residential district surrounding the intersection of the interurban and streetcar lines that connected Vancouver to Burnaby and New Westminster, the abundant creeks provided water for a brewery and early dairy farms. Lakeview was one of the interurban stations where passengers waiting for the tram had a great view of Trout Lake. This natural peat bog lake served as a water supply for the Hastings Mill boilers until the 1880s and remains a popular skating spot during cold Vancouver winters.

November 5th – A Virtual Stroll through Beaconsfield and into the Renfrew Ravine
Beaconsfield was originally dotted with small-scale orchards and other agricultural endeavors that took advantage of the area’s fertile soil. A small group of homes, including a post office, developed around Beaconsfield Station, a stop on BC Electric’s New Westminster interurban line located just west of the current 29th Avenue Skytrain station. The interurban brought the real estate promoters who pitched “ideal country residences with city privileges”; however, one thing development did not erase was the Renfrew Ravine – a deep forested respite from the city with one of the few open creeks left in Vancouver.

November 28th – A Virtual Stroll: Poking around the back lanes of Point Grey
Known for its sweeping sea views and beaches, West Point Grey has a rich history that extends beyond its historic homes to its back lanes. Interesting and sometimes forgotten spaces inhabited by garages, garbage cans and overgrown vines, lanes are places where an original geography of hills and valleys hides in plain sight. Local historian, author and seasoned walking tour guide, John Atkin, guided us through the hidden world of Point Grey’s lanes on this virtual walk to discover a few surprises along the way.

June 4th – A Virtual Stroll through Historic Strathcona
On this virtual stroll with local historian, author and seasoned walking tour guide, John Atkin, we came across converted school houses, a garlic warehouse, lost bakeries, Vancouver’s oldest brick school and some very innovative seismic upgrades. The neighbourhood grew on traditional ancestral lands of Indigenous communities and became home to many new immigrants seeking work at Hastings Mill and nearby industries from the late 19th century on. Today’s unique neighbourhood owes much to the legacy of community activism and determination.

July 9th – Top of the City: A Virtual Stroll in Mackenzie Heights
Perched at the edge of the escarpment overlooking the flats to the east, only a few houses were built in the Mackenzie Heights neighbourhood on Vancouver’s west side in the years before the First World War. A subsequent burst of development through the late 1930s and 40s saw the emergence of modest revival-style bungalows followed by more modern homes to infill the remaining lots during the 1950s and 60s. The demolition of homes during the 1980s and 90s introduced a range of interesting designs to these streets. On this Virtual Stroll, we explored this hidden neighbourhood and all of its eclectic architectural styles that have popped up over the last century.

July 23rd – A Virtual Stroll around Cedar Cove
The area of Cedar Cove was characterized by very large cedar trees and was long known and used by the Tsleil-Waututh. Non-native settlement began with the extraction of the trees that gave the area its name. Soon, a post office, a brewery and two huge sawmills occupied the cove. Japanese, Chinese, Sikh and other settlers called the area home. On this tour, we explored this diverse neighbourhood and found remnants of the earlier community.