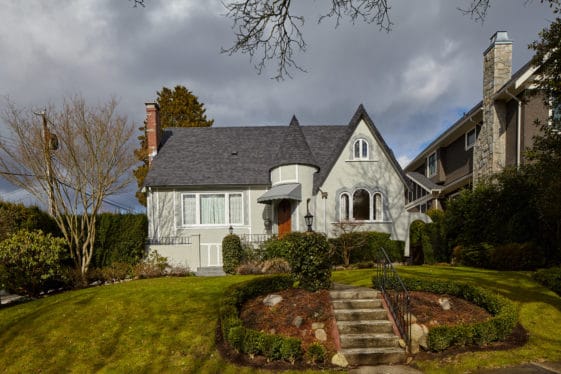 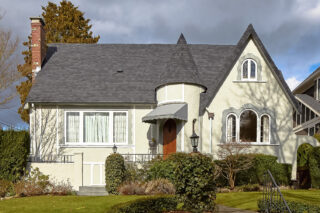 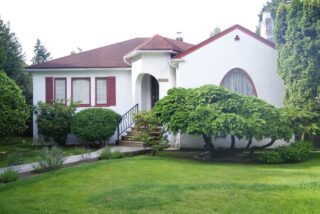 French Storybook homes are small and whimsical, known as “Dunbar Castles” in that neighbourhood, with hipped or side-gabled roofs and a projecting living room wing (under an L-shaped roof, in some cases), with a turret tucked into the L and forming a shelter over the front door. The turret’s roof may be hipped, conical or may have crenelations (‘battlements’). Windows may have arched tops, and an arched, quoined opening in the turret may frame the front door. Their cladding is coloured stucco. Roof edges may be rolled as in the English Storybook Style.

Like the English Storybook style, French Storybook style emerged in North America after WWI. Soldiers returning from European battlefields brought with them a familiarity with architectural styles. Among these were French farmhouses and castles. Builders translated elements of these traditional buildings into practical cottages. After a period of upheaval, the value of the picturesque and the traditional increased following the war. This contributed to the development of the French Storybook style, with its quaint tower and European flair. In a period where the economy was in flux, these cottages grew popular in the Dunbar neighbourhood of Vancouver.

The most common cladding form for Storybook houses is stucco, and decorative trim boards may be used to evoke medieval half-timbering. Brick is sometimes employed decoratively as a plaster insert to give the appearance of aged walls as seen in medieval European towns. The original roofs were generally cedar shingles, sometimes elaborated in exaggerated overlapping wave patterns to mimic the appearance of traditional thatched roofs.