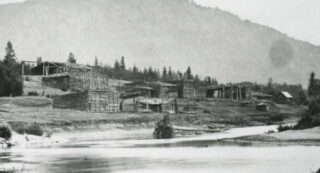 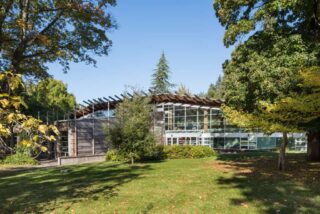 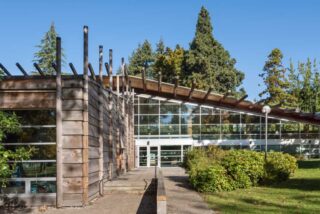 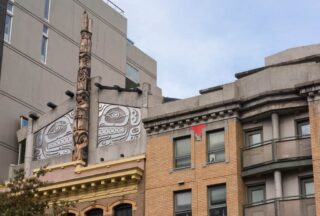 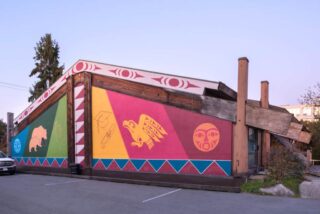 The traditional Coast Salish longhouse is a shed roofed, cedar plank structure. They are built with support poles for wall planks and heavier posts for roof beams, clad in horizontal cedar planks. Traditionally, most had interior house posts rather than exterior ornamentation, while any totemic or crest carvings or paintings were located inside. The interior organization and size varied. The building style has changed over time to incorporate other roof styles, including a flat mansard style and a gable roof style. Today, a Coast Salish longhouse can take a variety of forms, adapting traditional forms, techniques and materials for modern needs. They may also synthesize traditional design and construction elements with contemporary forms.

Longhouses have been built in the area now known as Greater Vancouver for hundreds if not thousands of years. For generations they have offered practical living space mixed with communal areas, providing a centre of community and ceremonial life. However, there are no historical Coast Salish longhouses remaining in Vancouver. The last was removed from the village Xwáýxway in Stanley Park in the 1880s, to build the park’s perimeter road. The colonization of the region eradicated others. Despite this, the style is still used for buildings in Greater Vancouver today, integrating traditional practices with needs of contemporary life.

Although rarely used for purpose-built residential architecture now, the longhouse form lives on in cultural centres such as the UBC First Nations Longhouse and the longhouse at Musqueam. Other contemporary examples include Skwachàys Lodge in Vancouver, the Bighouse at Cheakamus Centre, and the Native Education College. In these forms, traditional longhouses continue to be a centre of cultural and ceremonial life.

Most pre-contact First Nations architecture in the Greater Vancouver area was eradicated in the process of colonization, leaving no surviving historic examples of traditional Coast Salish longhouses. However, these were not the only types of First Nations buildings in the region.

Pithouses (sqémél) were the other main style of residential architecture in Vancouver area before European contact. Although pithouses were built mainly in the upper Fraser Valley, particularly by members of Sto:lo nation, some were built at Musqueam as well. They were built into the ground, making them well-insulated for use as winter residences. They were usually round in shape but could also be oval, square, or rectangular, typically between 8 and 10 m in diameter.  The roof could be supported by a centre post system or suspension system, in which posts were anchored in side walls. Most pithouses were accessed through an entrance in the roof with a notched ladder leading to the interior. Pithouses are generally less well-known than longhouses, although they were built through the late 1800s.

Early missionaries built churches on First Nations lands, such as the Saint Paul’s Indian Church built on a Squamish Nation Reserve on the North Shore [Mission Reserve]. This church was originally constructed in 1863, with the current building dating to 1884, making it the oldest Catholic Church in the region and one of the oldest buildings, still providing a centre for community life. Other than Saint Paul’s, no mission churches remain, but this Gothic Revival church reflects a significant phase of Vancouver’s history. It is also linked to Canada’s residential school history, administering the St. Paul’s Indian Residential School until it was torn down in 1959.